SHOP WITH US
IN-HOME CONSULTATION

The Ghostbusters of North Carolina are Trapping Negativity in the Charlotte Community and Beyond!

Home/Community Service/The Ghostbusters of North Carolina are Trapping Negativity in the Charlotte Community and Beyond!
Previous Next

The Ghostbusters of North Carolina are Trapping Negativity in the Charlotte Community and Beyond!

No matter how great your city is, the fact is that there are people hurting. There are families and individuals who are going through unimaginable hardships, and they are trying to hold on to hope in the midst of life’s storms.

Even those who are not going through a particular hardship can benefit from having a little joy added to their day. And when individuals and organizations dedicate their time and energy to playing a role in bringing hope and joy to their communities, it’s truly a special act.

That’s the case for the Ghostbusters of North Carolina, an organization comprising of about 35 members across 3 different states, one of whom is Barrie Clark, Custom Installation Expert for Audio Video Charlotte. The Ghostbusters group began in 2016, when four individuals who shared a love for all things Ghostbusters got together to see how they could use their fandom to make an impact in their community.

From visiting children’s hospitals to making surprise appearances at birthday parties to riding in parades, the Ghostbusters of NC regularly take to the streets with their Ecto-1 Caddy, proton packs, and ghost traps to put smiles on the faces of those who need it most.

Below, we’ll discuss in more detail how the organization started, as well as the kinds of work they do in Charlotte and surrounding areas. 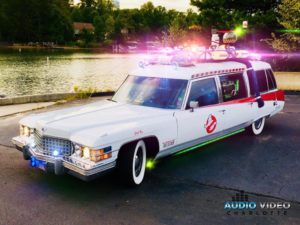 The Ghostbusters of NC organization was started when two neighbors had a conversation about their shared love for the film franchise. Kevin LaRue had just moved to the Charlotte area and, like his neighbor, he desired “to bring some fun and joy and smiles to kids and improve [the] community.”

Once the seed was sown, the two turned to social media to get the word out and recruit other people who had similar interests. Member Christopher Greer remembered it this way: “I wanted to see what it was about, what it’d be like actually being in this group and going into communities, spreading the cheer and bringing out the positivity…Once I went to the first meeting I was like I’m here. This is home to me.”

Shortly thereafter, Clark joined the fold. As an avid Ghostbusters fan, he was well prepared beforehand. Not only had he already crafted a uniform and proton pack, but he had also been sporting a car that he had converted to a full-blown Ecto-1. Over the last few years, the Ghostbusters group has grown to consist of about 30 members spanning the entire state, and they consider themselves to be a family. 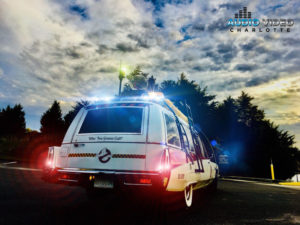 In an effort to contribute to the betterment of our community, the Ghostbusters of NC participate in many charitable events in Charlotte and surrounding areas. However, what has gained them the most attention, perhaps, is their visits to children’s hospitals, specifically Levine Children’s Hospital, the Wounded Warrior Program, and the Disabled American Veterans. These visits, which occur at various hospitals across the state, are driven by the sole purpose of trapping negative energy and releasing positive vibes into the hospital rooms of sick children.

As Clark described it, “When you go as a family to a hospital and you visit other kids with their families, there’s an enormous bond between us and them.” Member Christopher Greer likened the experience to children “getting that toy [they] always wanted on Christmas.” As priceless as it is for the kids, however, it’s also a rich experience for the parents to see their child filled with such excitement and joy, even if for a brief moment.

Along with going to children’s hospitals across North Carolina, the Ghostbusters group also surprises children at birthday parties. One mother wrote on the group’s Facebook page about how, after just two weeks of notice, the group showed up at her five-year-old son’s birthday party—bearing gifts and going along with all of the family’s planned activities. Another mother wrote about how they mailed her a bunch of gear and other items that she then used for her son’s Ghostbusters-themed birthday party.

The Ghostbusters group and their Ecto-1 can also be spotted riding at various parades in North Carolina. As you can imagine, they’re often a crowd favorite among the kids and adults alike. 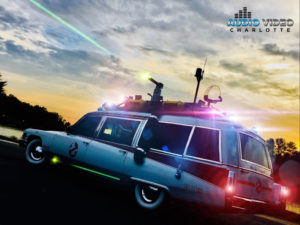 Nothing is more essential to society than family and community, and Audio Video Charlotte goes to great lengths to invest in our community! The work of groups like Clark’s Ghostbusters of North Carolina serves as a reminder that we can all get involved and leave an impact. Or, as Clark put it, “If you’re an average individual, you don’t have a red cape and you can’t fly and burn concrete with laser eyes, you can make a difference.”

By David Stollmack|2020-05-28T12:26:07-04:00May 28, 2020|Community Service|Comments Off on The Ghostbusters of North Carolina are Trapping Negativity in the Charlotte Community and Beyond!

About the Author: David Stollmack